My oldest is an enormous fan of comic book stores. It’s like he has an internal GPS that enables him to locate any shop within a 3 mile radius. His interest in these stores started with his love of superheroes but has now grown to include graphic novel adapations of books he loves — classic stories, chapter books, etc. For awhile my middle child trooped along on these excursions, picking up something that looked fun, but usually losing interest quickly. That is, until we discovered “Bink & Gollie.”

Lovers of the Mercy Watson series are already familiar with author Kate DiCamillo. She also wrote “The Tale of Despereaux,” a book many know from the film adaptation. I wasn’t familiar with her partner on this series, Alison McGhee, but she’s had a past collaboration with Peter Reynolds and that’s enough for me. The illustrator, Tony Fucille, worked on the films “The Lion King,” “Finding Nemo,” and “The Incredibles.” 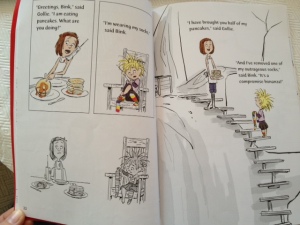 Bink and Gollie are two little girls with amazing imaginations and equally amazing adventures. They roller skate, they buy crazy socks, they eat pancakes together, and they take imaginary adventures to the Andes. The first volume of the series contains three stories in picture book style – large engaging images with short text on each page.

What I love about these girls is that they are fiercely independent. They each have their own likes and interests. They pursue their own hobbies, even if the other isn’t particularly interested. They also support one another. Gollie troops along on Bink’s sock-buying expedition, even though it isn’t her cup of tea. They argue, but are never mean. And in the end, you know they are true friends and that friendship will always come first.

A second book is now available — Bink & Gollie: Two for One.