It’s been getting a little deep over here so I thought it was time to lighten things up.

What I believe is that we don’t focus enough on the importance of imagination. We are scheduled and focused on the “to do” list and always on the go. Do we take time to daydream, to think and to imagine?

Watch a kid sitting alone in a room. What do they do? They often will pick up a toy and begin playing with it. But then they invent a new way to play with it. Or they start talking to it. A pony becomes a unicorn becomes the way that a superhero gets to his grandmother’s house to fight the bad guys. In that little room with that one toy, there is a whole new world.

As a grown up, when do you let your imagination fly? Sometimes we need to turn off the noise and just let our brains go. Drive to work without the radio on. Stare out the window on your train commute. Erase the to do list from your mind when you are in the shower and just imagine. Allow yourself 15 minutes at the kitchen table with a cup of tea and no task at hand. 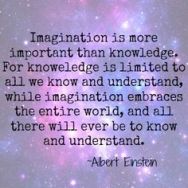 Want to check out some of my favorite books that spark imagination?

2 thoughts on “I Believe Wednesdays: Imagination”