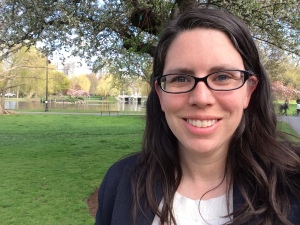 I am a freelance writer, editor, and lifelong lover of books. I was the kind of kid who woke up before sunrise to read before school and my passion for books has never waned. (This is clearly in evidence when you take a peek at my To Be Read stack.)

After nearly a decade of work in public health and the non-profit sector, I became a stay-at home mom. Twelve years and three children later has helped me confirm my life’s ambition — writing.

On a wing and a prayer I developed my first (and hopefully not last) book “A Tea Reader: Living Life One Cup at a Time.” I compiled this collection of essays written by tea lovers around the world and it was published by Tuttle Publishing in 2011. Since then I have had articles and essays featured in outlets including Yankee Magazine and Boston Globe Sunday Magazine. I served some of my favorite professional moments as Senior Editor of Tea Magazine and through that role even got to cover a Mother’s Day tea at the White House hosted by Michelle Obama, Dr. Jill Biden and Prince Harry.

I’ve now branched out from my tea writing to a new world of picture books and middle grade books. I am a member of NESCBWI, the Vice President of Friends of the J.V. Fletcher Library and an advisor for an elementary school Newspaper Club.

You can follow my regular writing on my blog. I can also be found wasting a great deal of time on Twitter at @KatMuniWrites. I play a bit over on Pinterest too.